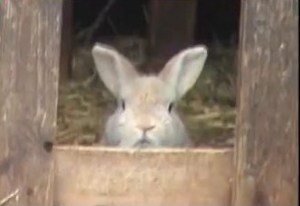 Meet Champis, a 5-year old mixed-breed rabbit and pet of Nils-Erik and Greta Vigren, who is quickly becoming a YouTube and online sensation.  Little Champis lives in the village of Kal in north Sweden.  What makes Champis extraordinary is his uncanny natural ability to herd the Vigren’s sheep.

This behavior was noticed last spring when the Vigren’s first turned their sheep out to pasture after a long winter.  Little Champis hopped along, keeping them in line just as the sheepdogs do.  Even more remarkable is the fact Champis was never trained to herd.  He’s apparently picked up his skill by watching the other sheepdogs. 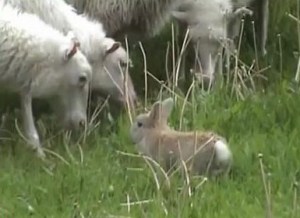 Dan Westman, a sheepdog breeder who shot and posted the video of his friends’ remarkable bunny, said he was in awe when he first witnessed the phenomenon, noting Champis does the job even better than most dogs would.

“It’s really incredible, it’s a herding rabbit,” he said. “He rounds them up, and if they get close to escaping through the gate he sometimes stops them,” he said.

“I mean I work with sheepdogs and know how hard this is. There are very few dogs that could do what this rabbit does.”

According to the Vigrens, Champis also looks after the hens. 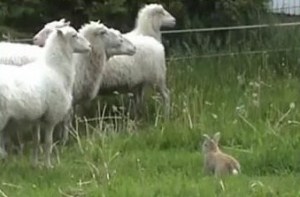 “He just started to behave like a sheepdog,” Greta said, adding that while he likes to round up the sheep, he is consistent about leaving the farm’s hens alone, treating them more gently.

“He’s like a king for the whole group. He thinks he rules over both the sheep and the hens. He has a very big ego.”

The amazing thing is the sheep pay attention to the little bunny and take him quite seriously, paying their minder a load of respect.

You can see the full article here. 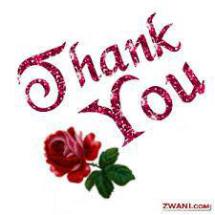 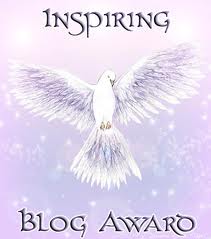 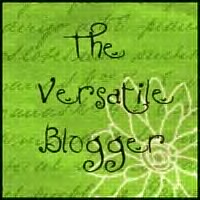 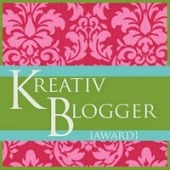